Here is some introduction of Sir Richard Branson from Solidworks Website 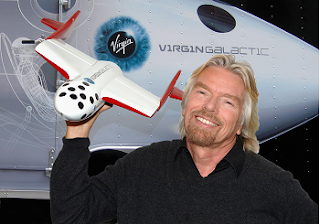 “Sir Richard Branson, Founder and President, Virgin Group
Sir Richard Branson is founder of the Virgin Group, consisting of more than 200 companies employing over 50,000 people in 30 countries, and recording more than $20 billion in 2006 revenues. An entrepreneur since the age of 17, Richard has built a variety of companies into global successes. From music and financial services to airlines and mobile telephony, the Virgin brand epitomizes innovation, exceptional customer service, and widespread customer loyalty. In the spirit of his own business activities, Richard started Virgin Unite, the not-for-profit entrepreneurial foundation that works together with business partners, non-profits, and Virgin Group employees on global environmental, educational, and health initiatives. Since 1985, Richard has also been involved in a number of world record-breaking attempts. Richard is married with two children.” 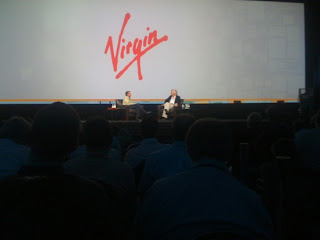 During the first day of general session, Sir Richard Branson was introduced immediately after the video and was “interviewed” so to speak by SolidWorks CEO Jeff Ray. Sir Richard stressed the importance of talking to the consumer AT LENGTH BEFORE starting the design process. You have to understand the consumer’s needs fully before doing the design.
” UNDERSTAND CONSUMER NEEDS BEFORE STARTING DESIGN PROCESS “
He spoke of his world record attempts in boats and hot air balloons as well as his early days starting the Student Magazine. He had a really funny story about how he got into the airline industry. He called Boeing up and told him who he was and asked them how he could get a second hand 747 to use as a test bed for some of his ideas. Once Boeing figured out who he was he was able to secure a plane pretty quickly. All of Sir Richard and his team’s ideas of what would make the ultimate airplane flight was put into place and the rest as they say…is history.
Sir Richard also told a story about how one of their new luxury airline seat designs were tipped off to one of their competitions. Once they saw their competitor’s seat design, they immediately scrapped their entire line. (scapped a Hundreds of millions of dollars project to be the best in industry) and redesigned the seat to be the BEST product out there…period. He also discussed many of his efforts to make the earth a more “Green” place. He once flew one of his Virgin Airline jets successfully on biofuel!
” ONLY THE BEST PRODUCT FOR MARKET “
The Virgin Galactic name was registered back in the 1990’s. Sir Richard was ALREADY thinking about space flight then and began meeting with scientists and engineers in hopes of pioneering the effort. Of course that led him to Burt Rutan which resulted in the X prize award winning Spaceship One. Sir Richard says that Spaceship Two should have it’s first test flight before the end of the year. The first flights will be suborbital which is much like what was done with Spaceship One, but orbital flights are in the future as well!
“VIRGIN GALACTIC IS FIRST COMMERCIAL COMPANY THAT ACHIEVING WHAT ONLY OF THE WORLD”S MOST POWERFUL NATIONS HAD DONE BEFORE.THEY PUT MAN IN SPACE, and CLAIM IT AS VIRGIN TERRITORY”
What is the breakthrough of VIRGIN GALACTIC – SpaceShip One?
Here is the Interview video about Spaceship One and Sir Richard Branson.

I personally like the animation video below as it shows the whole process of having a holiday in space. This video was showned on the 2nd Day of General Session of Solidworks World 2009. I had difficulty to search for this animation video but finally i found it at youtube and with Jason’s help, i managed to convert these video files from youtube to MP4 and from MP4 to AVI. I hope that i am the first person who post this animation in solidworks related blog.

This successful REAL story is a combination of :