CAD Chair, Breakfast Maker or Workbench? Have you vote? 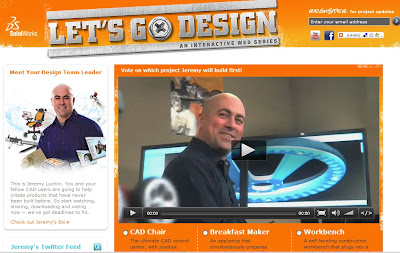 Out of surprize, i voted the breakfast maker and found that it was the less voted project. Maybe most of started to forget about how important is breakfast to us. Haha!~

A bit about Jeremy:

Jeremy Luchini is a mechanical engineer, avid traveler, and custom vehicle enthusiast with 18 years of experience in design engineering. Throughout his career, Jeremy has helped create everything from games and musical instruments to machine tools and sports cars. Innovative companies like MegaBrands, Line6, and HAAS Automation have been known to draw on his considerable talents.

Over the past nine years, Jeremy has also worked at DS SolidWorks training and certifying thousands of advanced users. Most recently, Jeremy partnered with SolidWorks customer Factory Five Racing to build a high performance, hybrid dragster which was unveiled at SolidWorks World 2010.

Not surprisingly, Jeremy also designs in his spare time. His personal projects include creating his own drag race-influenced chopper and refurbishing a 1967 Jeep Kaiser M-715 military troop carrier – which he commutes to work in every day.