Hi all,
Do you really fully utilize all the features in SolidWorks? This is very important to ensure your work progress is not dragged by unnecessary job!
Recently I have a friend who has attended the SolidWorks Advance Assembly Training in IME training centre. The feedback she gave me was: “I found that I have been a silly gal for 2 years!” She is actually a SolidWorks user and always working with some large assembly modeling in her design. When she knows that SolidWorks actually has a function called “Feature driven Pattern” she was so surprise and at the same time feel regret of never discover about this feature for 2 years! Previously she has spend a lot of time to assemble all the fasteners or some other standard components into the assembly. What she has done before this was picking the reference face one by one and put in the Mate relation in order to fit those screws or fasterners into the assembly…Try to imagine if her assembly consists of hundreds of fasteners?
This feature may seem simple and normal for those users who already known or applied. However, I would like to share this so that we are doing efficiently with SolidWork!
1. Below figure is an example of a conveyor frame, to attach the rollers along the conceyor frame, you will need to create the mounting hole along this frame 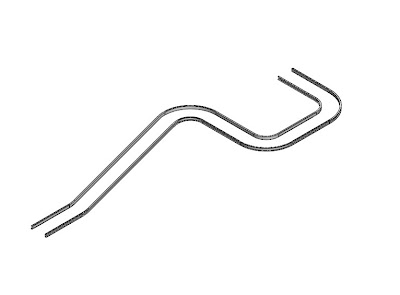 2. This can be done by using the Curve Driven Pattern to create the copies of holes along the frame: 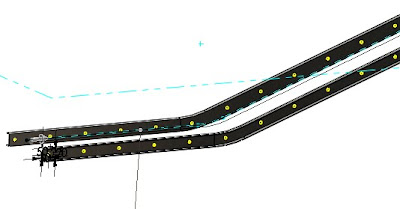 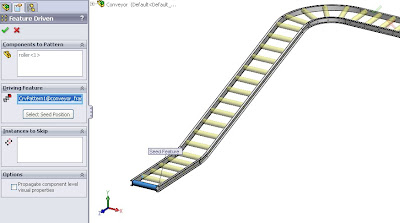